It’s not everyday that you get to stand in a place, a specific spot, and know that your life is what it is today because of an event that happened here over 237 years ago.  This summer my family got to do just that!  We had the awesome opportunity to visit Washington Crossing Historical Park in Washington Crossing, PA.

Weeks before we drove up to the park, my 4 year old and my 7 year old and I researched and read (children’s) stories about General George Washington and his army.

We knew that in the winter of 1776, the War for Independence was failing.  General Washington and his army knew only defeat and discouragement.  Early on in December of 1776, he and his men were forced to retreat across the Delaware River into PA.  Cold, wet, many soldiers hardly clothed, and with very little food, this was not the likely sight of war heroes and flags waving.  In fact, Washington saw his army shrinking daily due to desertions and enlistments expiring.  How’s that for a happy Christmas?

But on December 25th, after much deliberation and preparation, and truly most of the odds totally against him, Washington and his men began to cross the Delaware.  “Ok,” you say, “I know that story.  So he crossed, they fought, they won and the rest is history.”  But no, that’s not it!  That’s not the whole picture.

So my kids, my husband and I are standing right next to McConkey’s Ferry Inn.  It’s a beautiful grey stone, house-like two-story building, with a simple pediment over the front door and an ice-house right next to it.  Beautiful park like setting.  But you close your eyes and there’s so much more…

This is the spot…RIGHT HERE…in 1776 on Christmas night at 6:00 PM (about the time you and I sit down to our Christmas dinner with family), when 2,400 troops began assembling for the crossing of the Delaware.  The river was choked with ice.  Flat, sharp jagged pieces flowing down river.  A blinding snow storm blows in, sleet, wind.  There are no Ugg boots for these men, no wool hats to protect their head and ears, no NorthFace water-proof down jackets, no.  They are lucky to have their wet wool coats and thin leather boots.  Maybe socks – but they’re wet, too.  Dinner before a big fight?  Probably not.  Oh, and some men are not even wearing shoes.  They are bare-foot.  Feet are bleeding and yet they are still walking in the snow.  In fact – not just walking.  They are loading guns and cannons and cannons balls and horses on to heavy Durham boats.  And these boats were not custom made for this fight…nope.  These boats were usually used to carry pig iron down the Delaware River.  The troops just grabbed what they could.

So as I am standing by the Inn in this lush green grass, I see a small trail that leads down to the river.  I grab my kids hands and we head down the path.  “Where are we going, Mom?” my four year old asks.  “On an adventure!” I reply. 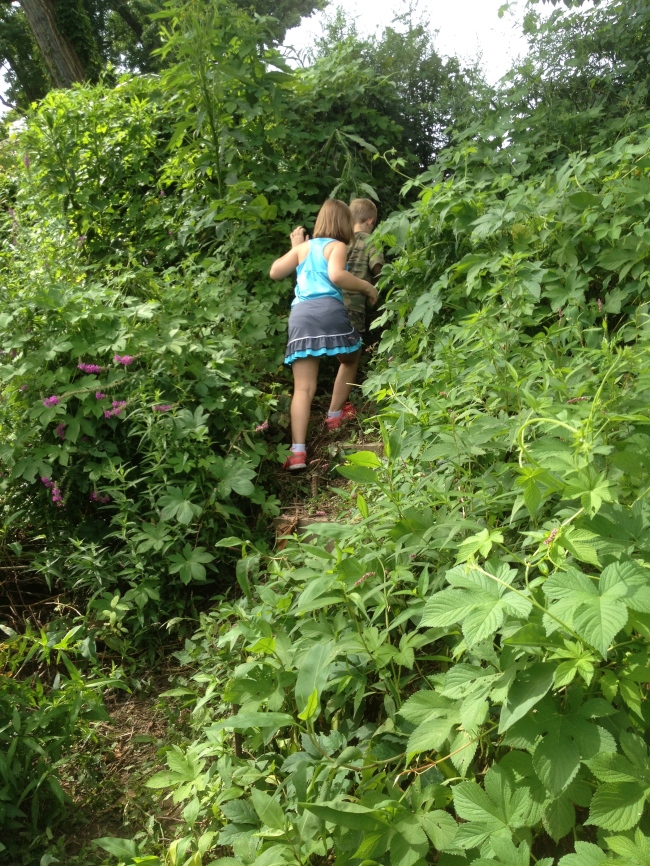 I took them to the river’s edge.  There was a log that had drifted up.  We sat down – them on either side of me.  I asked them to be quiet for a moment.  We just looked out over the water.  It was a gorgeous day.  And then I began to tell them what you just read above.  I wanted them to imagine the immense hardship, the infinite odds against these amazing men, the blizzard like weather…and how it didn’t stop these guys.  There was a passion in their hearts that would. not. die!  “These are the times that try men’s souls…” said Thomas Paine in “The Crisis” on December 23, 1776.*

We sat there in silence.  This was the place, this was the spot on the river, where history took a hard right turn.  This bold move by General Washington changed the tide of the war in the American’s favor.  It reignited the cause for freedom and rushed new life to the American Revolution.  We are Americans, free and fortunate to be living in this great country.  We THANK them for their ultimate sacrafice!  And on that beautiful, peaceful day by the river, my family and I did just that!

*The Crisis by Thomas Paine

(This is just a small portion of Paine’s article, The Crisis.  Google it, if you want to read the whole post.)

December 23, 1776
THESE are the times that try men’s souls. The summer soldier and the sunshine patriot will, in this crisis, shrink from the service of their country; but he that stands by it now, deserves the love and thanks of man and woman. Tyranny, like hell, is not easily conquered; yet we have this consolation with us, that the harder the conflict, the more glorious the triumph. What we obtain too cheap, we esteem too lightly: it is dearness only that gives every thing its value. Heaven knows how to put a proper price upon its goods; and it would be strange indeed if so celestial an article as FREEDOM should not be highly rated. Britain, with an army to enforce her tyranny, has declared that she has a right (not only to TAX) but “to BIND us in ALL CASES WHATSOEVER” and if being bound in that manner, is not slavery, then is there not such a thing as slavery upon earth. Even the expression is impious; for so unlimited a power can belong only to God.

2 thoughts on “We THANK them!”